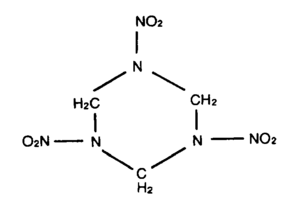 Among the most powerful of conventional explosives in general use, RDX, short for "Royal Demolition eXplosive" or "Research Department eXplosive", is also known as Hexogen or Cyclonite. It is usually employed in mixtures. [1]

Chemically, it is hexahydro-1,3,5-trinitro-1,3,5-triazine; It is a member of the nitramine class of organic nitrate explosives.

A variety of granular sizes are used in different explosive compositions, including:

RDX can be manufactured as a polymer bound, insensitive high explosive form that has reduced sensitivity to sympathetic detonation. This form has a lower concentration, less than 0.5%, of HMX, a by-product of conventional RDX manufacture. It also has a higher density, such that its crystals have fewer voids producing less cavitations when transmitting a shock wave. [2]

Another alternative with comparable performance but less sensitivity to shock is nitrotriazolone.