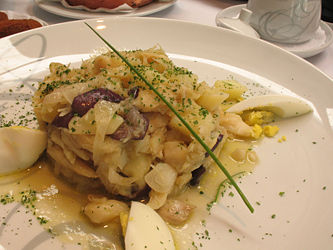 Portuguese cod casserole (bacalhau à Gomes de Sá) is a dish made primarily from dried cod, potatoes, and onions. It is a specialty of the city of Porto, but is nowadays popular throughout the whole of Portugal and is considered one the country's greatest bacalhau recipes. Bacalhau can mean cod in general but usually refers to the dried and salted cod commonly sold in the country.

Origin of the name

Gomes de Sá was the son of a wealthy 19th-century merchant in Porto who apparently dealt in cod. The family fortune dwindled and the son found a job at the famous Restaurante Lisbonense in downtown Porto. It was there that he created the recipe. He died in 1926.