Photography literally means 'painting with light' (from the Greek photos, light, and grapho, to describe, write or draw). Photography is the art and science of capturing an image on a light sensitive material. Photography is usually done with a camera using visible light, but other forms of photography include photograms, microphotography, infra red, ultra violet and x-ray photography and astronomical photography using various kinds of telescopes.

Joseph Nicéphore Niépce is generally credited as the first person to successfully combine the camera obscura with a 'fixable' light sensitive material to produce the first 'heliograph' in 1826. He was initially interested in lithography, working with his son acting as draftsman. When his son was called away to war his own poor drawing skills forced him to experiment with other methods of obtaining an image. He began experimenting with glass and copper plates, using silver chloride varnishes amongst other methods, but like others before him he was unable to 'fix', or make permanent, the image. His first success came with the use of bitumen of Judea, a refined asphaltum mixed with oil of lavender and turpentine, that was used as an etching resist. He found that if he made a paper print (etching) transparent by soaking it in oil and laying on a prepared glass plate, then exposing that to the sun, areas exposed to light hardened and bleached a little (to a grey color). Those areas under the black portions of the image remained soft and could be washed away with a mixture of turpentine and oil of lavender. He was able to create the first photo etchings this way with copper plates, which could then be etched in an acid bath to produce a printing plate.

After buying a professional camera obscura he was able to use this process on pewter plates prepared with bitumen of Judea placed in the back of the camera to produce the first "heliograph from nature". This image took 8 hours to expose, and has to be viewed at an angle, but it is the first permanent photograph ever produced.[1]

In England, William Fox Talbot also experimented with photography, creating the calotype process, which he detailed in The Pencil of Nature.

From science to art 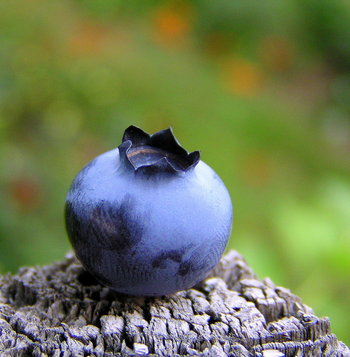 (CC) Photo: Thomas Mues
Photographing the little details of life: The last moments of a blueberry, just before being eaten.

Cameras in the nineteenth century were large, took photographic plates and required a long time for exposure. Subjects in portraits would have to sit for minutes, and some photographers would use restraints or posture holding devices to reduce movement. People started to use photography for a variety of different purposes - illustration, professional portraiture and recording landscapes. Julia Margeret Cameron was one of the first photographers to take photographs that were more expressive and symbolic - for instance, photographing celebrities, including the poet Alfred Lord Tennyson, and creating images based on Arthurian legend.

In the early part of the twentieth century, George Eastman created the Kodak camera to bring photography to the masses. These cameras used roll film rather than plates, and once you used the full roll, you sent it back to the factory in Rochester, New York, for the pictures to be developed, and the camera fitted with a new roll. Eastman came up with a phrase to market the camera: "You press the button, we do the rest".

The photographer Ansel Adams took photographs that approach technical perfection, usually using large format cameras, of landscape scenes on the West Coast of the United States, including Yosemite Valley and other national parks in California. Adams' photography was politically valuable to conservationists in the Sierra Club, and led to the protection by Congress of many of the areas Adams photographed. Adams also documented much of the process of black and white photography and darkroom processing (including the Zone system) in five books: The Camera, The Negative, The Print, Natural Light Photography, and Artificial Light Photography.

In the United States during the Depression, the Farm Security Administration commissioned a group of photographers to document the effects of the Depression on rural America. The group was led by Roy Stryker, a Columbia University economist who was told to "show the city people what it's like to live on the farm"[2]. Dorothea Lange's Migrant Mother photograph has become one of the most reproduced images of the twentieth century - it shows thirty-two year old "hungry and desperate mother... She said that they had been living on frozen vegetables from the surrounding fields, and birds that the children killed. She had just sold the tires from her car to buy food. She sat... with her children huddled around her, and seemed to know that my pictures might help her, and so she helped me"[3]. Lange and the other FSA photographers - Jack Delano, Walker Evans, Arthur Rothstein and others - were highly influential, along with books like The Grapes of Wrath (John Steinbeck) in pushing the New Deal ahead. Some of the FSA photographers went on to become well-regarded afterwards, with Walker Evans exhibiting independently.