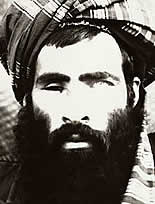 Mohammed Omar, often called Mullah Omar, was the leader of the Taliban in Afghanistan, certainly through its origin, and possibly continuing to be its principal leader. Very little is known about him; as a world leader, Kim Jong Il has the public visibility of a Hollywood starlet. The United States offers up to USD $10 million for him, but its reward notice has only a picture and a few words. [1]

Few pictures or descriptions exist, but he is generally described to be tall, black haired and bearded, and blind in one eye. The blindness is from a wound suffered while fighting the Soviets. He has been described as relatively young; various accounts give his year of birth as 1950, 1959[2], or 1962, with the Kandahar area mentioned most often as the place. [3] His family was poor, belonging to the Hotak tribe of the Ghilzai branch of the Pashtun people. They moved to Tarkinot, in the Urzugan Province, during the Soviet occupation. He moved to Singesar village in Kandahar Province, and became both a mullah and student. [4]

As the Soviets were driven out, some Afghan militias indulged in banditry. Pakistan's Inter-Services Intelligence (ISI) had been providing some assistance to the Taliban. According to retired major general Anwar Sher, the warlords "... thought they were demigods and could do what they liked," the Taliban was seen as a "Robin Hood" like force to reduce their excesses. Omar achieved his first prominence in Afghanistan, according Rahimullah Yousefzai, a reporter for The News of Pakistan, one of the few who has interviewed him, "he was 'horrified,' by the behavior of former mujahideen commanders that he had fought alongside from 1989 to 1992. They were kidnapping and raping boys and girls, stealing from Afghans at gunpoint on the road, and driving international aid workers out of Kandahar. So, Omar and 30 ethnic Pashtun followers "picked up the gun" - at first to stop four notorious mujahideen who were raping women near Omar's village - and later to bring law and order to an entire country." [5]

"Pakistan had wanted Omar to reduce his increasingly strict rule. With the coming of Osama bin Laden, however, the Taliban gained their own funding and independence. [6]

He had been a relatively little-known fighter against the Soviets, in the Hizb-e-Islami (Islamic Party of Afghanistan), then led by Maulvi Younis Khalis.[7]

Omar is a mystic, affected by his dreams. Yousefzai, said Omar told him "started the Taliban after a dream in which Allah came to him in the shape of a man, asking him to lead the faithful,"[5] which led him, in 1996, to declare his leadership. The Taliban had been growing in strength, but were loosely organized. On April 4, 1996, he unsealed a shrine in Kandahar that held a cloak believed to have belonged to the Prophet, the founder of Islam. "The cloak had not been touched since some time in the 1930's. He lifted it in the air as he stood on a rooftop, displaying it to a crowd of followers. The event was caught on videotape, one of the very few times that he was ever photographed. He placed the cloak, which only the Prophet was said to have worn, upon his own shoulders. And at that moment, he declared himself the commander of the faithful, the leader of all Islam. No one had claimed that title since the Fourth Caliph, more than 1,000 years ago."[6]

He is not a charismatic speaker, and tends to work in a council; Mullah Wakil Ahmad Muttawakil (often called Mullah Wakil Ahmad), was his chief aide, spokesman, and doorkeeper; he became Taliban foreign minister. [8] Four months after the invasion of Afghanistan started, he surrendered local authorities and was transferred to American custody, where stayed for nearly two years. [9] Muttawakil emphasized that while the Taliban brought restrictions, they also brought security.

At approximately the same time, Osama bin Laden returned to Afghanistan, met with Omar, provided him with funds, and urged him to spread his vision to the world.

Bin Laden had built a fortress-like headquarters for him in Kandahar. After the 9-11 attacks, he was a primary target. Early in the operations, on October 7, an unmanned aerial vehicle spotted what might have been his vehicle; it was attacked by missile and a nearby building bombed. [10] Special Operations Forces (SOF) soldiers attacked Taliban headquarters in Kandahar on October 19-20, 2001.[11]

After leaving Kandahar, he was reported to have gone into mountains to the north. [12] There were unconfirmed reports that a July 1, 2002 air raid on a wedding party in Uruzgan Province, where he grew up, were intended to kill him. The bride waswas the niece of Mullah Bradar, a top Taliban official. "Two weeks after that debacle, Omar was spotted northwest of Deh Rawod, in Baghran, looking 'clearly depressed,' according to a senior Afghan intelligence officer in Kabul. Local people told the intelligence officer's agent that Omar had lost family members in the wedding-party bombing."

He is believed to be in the Federally Administered Tribal Area of Pakistan. A Pakistani Taliban leader in South Waziristan said they are in close contact.[13]

The Times of India reported, in March 2009, that he authorized participation in Saudi-sponsored peace talks. "'Mullah Omar has given the green light to talks;" said one of the mediators, Abdullah Anas, a former friend of Osama Bin Laden who used to fight in Afghanistan but now lives in London..."A big, big step has happened," Anas was quoted as saying by The Sunday Times. "For the first time, there is a language of . . . peace on both sides,' While the Taliban were doing well in fighting in Pakistan, Anas said there was recognition that a bloodbath would be needed for them to take control. [14]