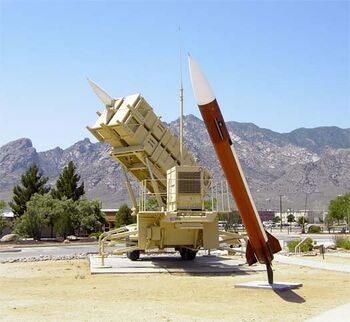 Originally a surface-to-air missile system, intended to replace the MIM-14 Nike-Hercules for high and medium defense, and the MIM-23 HAWK for medium but not low defense, the MIM-104 Patriot has had three major revisions beyond the baseline. The fourth, PAC-3, gives it an air-to-space capability against ballistic missiles in their reentry phase, typically for point defense. PAC-3 is considered a theater ballistic missile defense TBMD system.[1]

Since the U.S. has faced no recent tactical air threat, but did have a real threat from theater ballistic missiles, PAC-3 gave up air defense capabilities to improve ballistic missile defense; pure Patriot battalions became pure theater-level defense assets, and did not train for tactical missions. [2]

As part of current United States Army air defense artillery, it is complemented, for low-level targets, by the FIM-92 Stinger. The man-portable air defense system MANPADS version of the Stinger is not part of the air defense network, but Avenger and Linebacker Stinger launch vehicles tie into the Forward Area Air Defense network, and can share, with the Patriot system, data from the mobile AN/MPQ-64 Sentinel search radar. Its older communications tie into Mobile Subscriber Equipment, but the units now are part of the Joint Tactical Information Distribution System.

Target acquisition normally comes from the Patriot unit's AN/MPQ-65 PESA phased-array radar. This is directional with roughly a 110 degree field of view but 300 kilometer range. Recent upgrades, allow the missiles to be fired using information from the 360-degree AN/MPQ-64, which has only a 40 kilometer range. In the earlier all-Patriot air defense battalions, there were no Sentinels. The reorganized composite battalions include Sentinels, which can be placed, for example, on high terrain that would block the AN/MPQ-65 radar beam.[3]

The main Patriot radar can also be cued by the higher-altitude, longer-range AN/TPY-2 radar. It also can receive radar updates from other platforms, such as the E-3 Sentry radar aircraft, via the Joint Tactical Information Distribution System (JTIDS). Initial and midcourse guidance comes from the AN/MSQ-104 engagement control station.

The missile itself has a radar seeker, and, in the terminal portion of the trajectory, downlinks its information to the engagement control computer, and final course corrections come from the combination of ground radar and Track via Missile information.

While PATRIOT cannot fire on the move, its trucks are road-mobile and the system can be airlifted by heavy transport aircraft. It is a complex installation and takes a substantial amount of time to set up once moved.

It was developed by the United States Army, and, in that force, operated by soldiers of the air defense artillery branch. Countries using it include Egypt, Germany, Greece, Israel, Japan, Kuwait, the Netherlands, Saudi Arabia and Taiwan.

With some of these countries, Patriot is part of a multilayered defense. For example, Israel has an Arrow-2 missile, jointly developed with the U.S., which intercepts missiles at a higher altitude and longer range than does PAC-3. PAC-3, however, is considered a complementary second-tier point-defense to stop warheads missed by Arrow. There might even be a third-tier final point defense using lasers or autocannon. Israel has also exploring RIM-161 Standard SM-3, which has a longer range than Arrow-2. If it did acquire SM-3, Patriot would shift to the third tier.

Japan has PAC-3, but is also buying the longer-range RIM-161 Standard SM-3 naval anti-ballistic missile, to be installed on its Kongo-class destroyers equipped with the AEGIS battle management system.

The Medium Extended Air Defense System (MEADS) is a joint among the United States, Germany, and Italy to develop an air and missile defense system that is both mobile and transportable. [4] MEADS will replace U.S. and German Patriots, and the MIM-14 Nike-Hercules still used by Italy.

There are significant concern if MEADS will be more mobile than Patriot, and if MEADS units will truly be trained in both air and missile defense. [5]