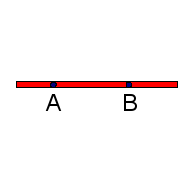 PD Image
Line AB (in red) through points A and B (in blue). Of course, a thick and bounded image can only hint at an ideal line.

In Euclidean geometry, a line (sometimes called, more explicitly, a straight line) is an abstract concept that models the common notion of a curve that does not bend, has no thickness and extends infinitely in both directions. It is closely related to other basic concepts of geometry, especially, distance: it provides the shortest path between any two of its points. In space it can also be described as the intersection of two planes.

Assuming a common (intuitive, physical) idea of the geometry of a plane, "line" can be defined in terms of distances, orthogonality, coordinates etc. In a more abstract approach (vector spaces) lines are defined as one-dimensional affine subspaces. In an axiomatic approach, basic concepts of elementary geometry, such as "point" and "line", are undefined primitives.

By lines we mean straight lines.

To define a line is more complicated than it may seem.

It is tempting to define a line as a curve of zero curvature, where a curve is defined as a geometric object having length but no breadth or depth. However, this is not a good idea; such definitions are useless in mathematics, since they cannot be used when proving theorems. Straight lines are treated by elementary geometry, but the notions of curves and curvature are not elementary, they need more advanced mathematics and more sophisticated definitions. Fortunately, it is possible to define a line via more elementary notions, and this way is preferred in mathematics. Still, the definitions given below are tentative. They are criticized afterwards, see axiomatic approach.

We could also define a line as the intersection of two planes (neither parallel nor coinciding). However, this definition does not work in plane geometry.

First we define betweenness via distances. A point B is said to lie between points A and C if

Now we define a line as a set of points that contains more than one point and satisfies the two conditions:

Remark 2. A set satisfying the second condition is either the empty set, or a single point, or a line, or a plane ("the whole plane" in planar geometry), or the whole space (in solid geometry). In the first two cases the set fails to contain more than one point. The last two cases violate the first condition.

Remark 3. The second condition should not be confused with the following weaker condition:

This is the line orthogonal to the line AB through the middle point of the line segment AB.

Let two different points A and B be given. The set of all points C such that

This is the line orthogonal to the line AB through the point A.

means that the lines AB and AC are orthogonal, that is, the angle BAC is right (unless C=A), see Pythagorean theorem (orthogonality is not only sufficient but also necessary for the equality).

In terms of Cartesian coordinates x, y ascribed to every point of the plane, a line is the set of points whose coordinates satisfy a linear equation

Here real numbers a, b and c are parameters such that at least one of a, b does not vanish.

Some properties of lines

For every two different points there exists one and only one line that contains these two points.

There exist three points not lying on a line.

For every line and every point outside the line there exists one and only one line through the given point which does not intersect the given line.

Two lines either do not intersect (are parallel), or intersect in a single point, or coincide.

Two lines perpendicular to the same line are parallel to each other (or coincide).

The definitions given above assume implicitly that the Euclidean plane (or alternatively the 3-dimensional Euclidean space) is already defined, together with such notions as distances and/or Cartesian coordinates, while lines are not defined yet. However, this situation never appears in mathematical theory.

In the axiomatic approach points and lines are undefined primitives.

The modern approach (below) defines lines in a completely different way.

Likewise, Euclidean space, its points, lines, planes and their properties are introduced simultaneously in a set of 20 assumptions known as Hilbert's axioms of Euclidean geometry (solid). It is possible to exclude plane-related axioms thus obtaining axioms of Euclidean plane geometry. The "most basic properties of lines" listed above are roughly the line-related assumptions (Hilbert's axioms), while "further properties" are first line-related consequences (theorems).

In geodesy, theodolites use light rays as straight lines. They can measure angles with accuracy about 10–6 of the right angle.

General relativity theory predicts that the sum of the three angles of a triangle may differ from two right angles because gravitation influences the geometry of the space, making it non-Euclidean. Near the Earth, the angle deficit is about S/(1024m2), where S is the area of the triangle. Thus, for a triangle with all sides of 1000 km, the angle deficit is about 10–12 of the right angle, — for now, far beyond accuracy of measurements.