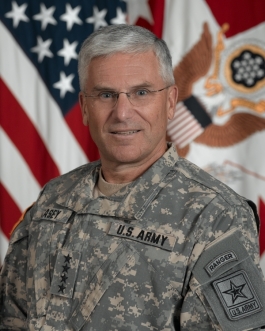 He was commissioned a second lieutenant of infantry on graduation from Georgetown University's School of Foreign Service in 1970. Later, he earned a Masters Degree in International Relations from Denver University and has held a Senior Fellowship at the Atlantic Council of the United States.

He commanded units from platoon, to the 1st Armored Division, to army-level subcommand of a Unified Combatant Command. In addition, he has been Chief of Staff of the 1st Cavalry Division, Operations Officer and Chief of Staff, V Corps. He has had duty as a member United States Military Observer Group, United Nations Truce Supervision Organization, in Jerusalem.

At the Joint Staff, prior to the March 2003 invasion, he was reported to have pressed GEN Tommy Franks, commanding United States Central Command and the Iraq War, for a "Phase IV" plan after the end of combat operations, but did not get a satisfactory response.[1] In fairness to Franks, he was not encouraged to do Phase IV policy, with direction coming from Washington. Casey did propose, on December 18, 2002, the creation of Joint Task Force 4, under BG Steve Hawkins, to plan a senior headquarters. This was approved by the Joint Chiefs of Staff, who again asked Franks for a plan. Casey also approached LTG David McKiernan, CENTCOM land forces commander, for input on Phase IV.[2]

At MNF-I, Casey was immediately involved in correcting the Abu Ghraib prison situation, and in reestablishing a senior-level military headquarters for operations, above the tactical level of MNC-I, in Iraq.

Initiatives as Chief of Staff

In a May 2009 presentation to the Center for Strategic and International Studies, he recommended that the U.S. drop its long-term planning assumption that it had to be prepared to fight two simultaneous major combat operations (MCO) (e.g., Iraq and North Korea). [3]

Recruiting and maintaining the Army is an area in which he has commented at length. He observed that before the 9-11 attacks, "we were a garrison-based Army that lived to train." The model, however, has moved to an at-war force generation model, where all forces must be expected to rotate periodically to the field. The support networks need to support that continuing rotation; the Army National Guard needs to expect regular foreign deployment. He also spoke to the problem of the declining quality of high school graduates as a national problem, and proposed a military-industry partnership to raise the quality of education. [4]

Asked whether adviser duty would become a career track, he argued that, to some extent, that exists: it is called United States Army Special Forces. Special Forces, however, are not oriented to training conventional forces, and he wants to experiment with models that combine, as part of force generation, Special Forces and conventional troops in working with other militaries. He said that Afghanistan experience is showing that partnership models "matching an Afghani battalion up with a coalition battalion or a coalition company--is having a greater impact on the indigenous forces than the transition teams."[4]

Future Combat Systems have been proposed for major budget cuts by Secretary of Defense Robert Gates, but he believes some may need to be redirected; FCS was focused on heavy forces but the need is in light forces. The Land Warrior System, for example, was cut to one battalion, but, when deployed, "...they said that they would rather leave the compound without their weapons than without their land warrior system (see intra-squad radio). It basically gives them an eyepiece where they can view a computer screen, and they have a military BlackBerry, so they can stay connected when they're out there. They know where everybody in their squad is--they know where everybody is, so their situational awareness is huge."[4] He seems more willing to give up the advanced ground vehicles, including redirecting some effort into less ambitious versions that still address improvised explosive device threats. [5]