Force XXI Battle Command Brigade and Below (FBCB2) is among the first user-friendly U.S. Army command and control networked computer systems, built by Northrop Grumman. It is a subset of Blue Force Tracker (BFT), which also includes the communications network and higher command workstations.

In a less than ideal situation, operational forces have FBCB2 that variously are, or are not, compatible with BFT. [1] “Is the system perfect today? The answer is, absolutely no,” said LTC David Grauel, who manages the BFT/FBCB2 programs. Roughly 30 percent of the earlier FBCB2 devices are on the shorter-range Enhanced Position Location Reporting System (EPLRS), while the remainder use a commercial L-band satellite network. Both connectivity approaches have problems, and the long-term solution is apt to be converting all to work with Warfighter Information Network-Tactical — which will probably need at least some swap-out or remanufacturing of BFT/FBCB2 radios.

Another problem is with the software, which Grauel describes as the most critical, is that it does not always, or quickly, identify the vehicle type in which the user is riding. It has “inflexible database structure” that is updated quarterly, containing of entries filled with information on every single FBCB2 system. A typical entry includes data on the type of vehicle, the equipment aboard the vehicle (radio, laser range finder, GPS device, etc.), unit reference numbers, IP addresses and map symbols.

"If a platoon leader from a Bradley unit who normally operates an EPLRS radio tries to log onto the FBCB2 system from another vehicle that runs a sat-com radio, he will not be able to access the network because his user profile shows that his equipment is not compatible with the sat-com network. To fix the problem, engineers have developed new software that will upgrade the database with a “self descriptive situation awareness” capability to allow FBCB2 operators to update user profiles without requiring major reprogramming."[1]

Users can send text warnings and alerts. It can interface to vehicle-level systems such as Inter-Vehicle Information System, so soldiers in an armored fighting vehicle can know not just the location of friendly forces near them, but their fuel and ammunition reserves, their speed and course, and other information to improve cooperation and decrease the risk of fratricide. Smaller computer platforms can be issued to individual soldiers. 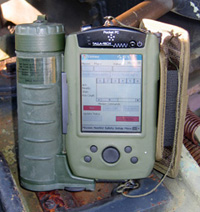 Another soldier-level device is the Pocket-Sized Forward Entry Device (PFED), which is a ruggedized Personal Digital Assistant that soldiers, at all levels, can send artillery fire support requests to Advanced Field Artillery Tactical Data System (AFATDS). It both speeds the call for fire, shows the soldier the material for double-checking, and lowers the chance of error.

Armored fighting vehicles equipped with it include the M1 Abrams and M2 Bradley. Helicopter-mounted versions are also available.

The portable AN/PSC-5 radio, which is man-portable and well as usable on aircraft, vehicles, ships and in base stations, can provide connectivity for FBCB2, as can EPLRS and some SINCGARS radios.