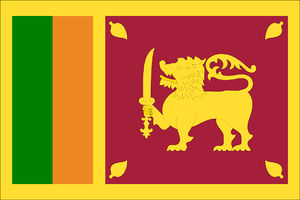 The flag of Sri Lanka has a yellow background on which are two panels. The smaller hoist-side panel has two equal vertical bands of green (hoist side) and orange. The other panel is a large dark red rectangle with a yellow Lion holding a sword, and there is a yellow bo leaf in each corner. The yellow field appears as a border around the entire flag and extends between the two panels.

The symbol of the Lion has played a significant role in Sri Lanka. The history of the Sri Lankan flag can be traced back to 486 BC, when Vijaya, the first King of the Sri Lankan people, arrived in Sri Lanka. It is considered to be a symbol of freedom and hope and was used extensively by monarchs who followed Vijaya. The legendary King Dutugemunu is believed to have embarked on the campaign in which he defeated the Indian King Elara, who had occupied parts of Sri Lanka, he carried with him a banner which portrayed a lion carrying a sword on his right forepaw along with two other symbols - the Sun and the Moon.

In the early 19th century, with the collapse of the Kandyan nobility, the flag of Sri Lanka was replaced with the Union Jack. The lion flag was kept away at the Royal Hospital Chelsea. Its existence was mainly forgotten by the Sri Lankan people until the independence movement in the early 20th century, when E.W. Perera, a prominent figure in the independence movement discovered it with the help of D. R. Wijewardene. A picture of the flag was later published in a special edition of the Dinamina newspaper at the 100th anniversary of the end of Sri Lankan independence. It became the centrepiece of attraction to the public, who for the first time since the fall of the Kandyan Kingdom became aware of its existence.