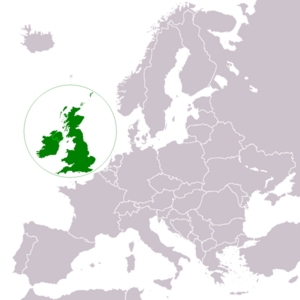 Location of the British Isles

The British Isles is a geographical term for a group of islands off the north-west coast of continental Europe. This north-east Atlantic archipelago comprises the very large islands of Great Britain and Ireland, together with more than 6,000 smaller islands.

The term has been considered at least mildly offensive by those with strong Irish nationalist views.[1] Other descriptions are also used, including "Great Britain and Ireland", "The British Isles and Ireland", "Britain and Ireland", and the deliberately vague "these isles", as well as other less common designations like "IONA" (Islands of the North Atlantic), "The Anglo-Celtic Isles", etc.

The isles extend from Pednathise Head, Isles of Scilly, in the south, to Out Stack, Shetland, in the north; and from Tearaght Island, Ireland, in the west, to Lowestoft Ness, England, in the east. There are more than 6,000 isles, amounting to a total land area of 121,674 square miles (315,134km²).

The British Isles are largely low-lying and fertile, though with significant mountainous areas in Ireland, Scotland, Wales, and the north of England. The regional geology is complex, formed by the drifting together of separate regions and subsequent orogenic, glacial and weathering activities.

Two sovereign states are located on the isles: the United Kingdom and Ireland.[2] The archipelago undoubtedly includes the Isle of Man, a British crown dependency; and some sources [1] [2] include the Channel Isles in the British Isles, although historically they are a Norman archipelago. Iceland and the Faeroe Isles were sometimes geographically associated, but have never been under British, Irish or Roman rule and are not today normally regarded as part of the British Isles.