See the tab above for Recipes of Bolognese sauce. 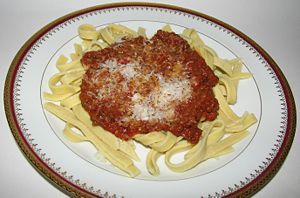 Bolognese sauce (ragù alla bolognese in Italian, or sometimes simply ragù) or Bolognese is a well-known pasta sauce that originated in Bologna, Italy. Although its primary ingredient is meat, Bolognese is often thought of as being a tomato sauce. In Bologna, however, authentic recipes generally have only a modest amount of tomatoes, in some recipes none at all. It is traditionally served with freshly made tagliatelle or other robust pastas. "Equally classic," says Marcella Hazan, "is Baked Green Lasagne."[1] In spite of how it is frequently served in the United States and elsewhere, she writes that: "Curiously, considering the popularity of the dish in the United Kingdom and countries of the Commonwealth, meat sauce in Bologna is never served over spaghetti."[2]

In 1982, the Accademia Italiana della Cucina (the Italian Academy of Cooking), at the request of the Bologna Chamber of Commerce,[3] promulgated a recipe that limited a ragù's ingredients to beef, pancetta (Italian rolled bacon), onions, carrots, celery, tomato paste, white wine, and milk.[4]. Like many classic dishes such as beef bourguignon or sauerbraten, however, there are innumerable means of preparing ragù and for each recipe a number of adherents who argue that only their method is the correct and traditional one.[5] Generally, however, to be considered authentic, a Bolognese should begin with a mixture of finely chopped onions, carrots, and celery sautéed lightly in finely diced pancetta—which renders its fat—and/or butter and possibly olive oil. This mixture is known as a soffritto. Ground beef (and perhaps ground veal and/or ground pork) is then added and browned. Other ingredients during the lengthy cooking process include milk and/or cream, white wine, tomatoes or tomato paste, meat broth, nutmeg, salt, and pepper. Some chefs believe that a successful ragù can be produced with only a few hours of simmering; others, however, insist that three or four hours, or even more, are needed. When served with pasta it is almost always accompanied by grated Parmigiano-Reggiano cheese.

A typical Bolognese sauce preparation. 1) A soffrito is made of finely chopped onions, celery, carrots, and pancetta has been cooked in olive oil; 2) meats (beef, pork, and lamb) have been added, lightly cooked until they lose their color, and then are boiled rapidly with milk until the milk evaporates; 3) white wine has been added and also boiled until it evaporates; 4) canned tomatoes and canned, unflavored tomato sauce have been added and are ready to begin cooking, along with a little red wine; 5) Near the end of the very slow, 8-hour simmering. A little additional water has been added every half-hour or so; 6) the finished Bolognese, ready to be served; 7) Bolognese sauce on fusilli pasta. (CC) Photo: Hayford Peirce and Stephen Ewen.