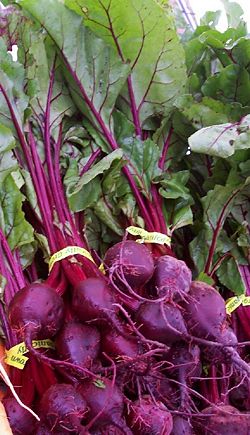 Beet is the common name for the root of Beta vulgaris, cultivated as a vegetable. It is native to southern Eurpoe and Asia.

Beets are best grown in light, friable soils. They require cool temperatures in the soil, around 60-65°F; above 77°F they start to be damaged.

The beet is a biennial, reproducing only in its second year, but as a crop it is usually harvested the same year it is planted, because the root will already be fully formed.

Also called table beet or beetroot, this is grown directly for eating. It is eaten cooked as a vegetable accompaniment to meat, or in soups, especially borscht; or pickled, cold, in salads.

Developed in Germany in the 18th century, this is now a major source or sugar for the world. It is grown extensively in the United States and Europe. 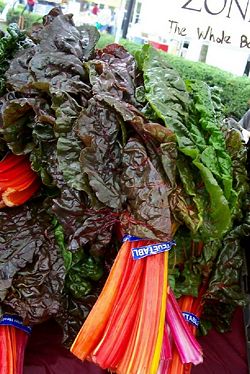 Better known as Swiss chard, this is a variety grown for its greens, which are used in salads or as a seasoning.