An autocannon is any artillery piece that is loaded from a magazine of shells, and can continuously fire and reload until the magazine is empty. Historically, autocannon have been of fairly small caliber, but it is quite common to find automatic naval guns of 5"/127mm caliber. The original driver for autocannon was anti-aircraft artillery, as aircraft speeds became too fast, for conventional artillery to fire fast enough to have a significant probability of hitting a rapidly moving aircraft. Autocannon have also been standard for aircraft guns, when smaller machine guns became less effective. Land forces were slower to adopt autocannon, but there are increasing trends in that direction. 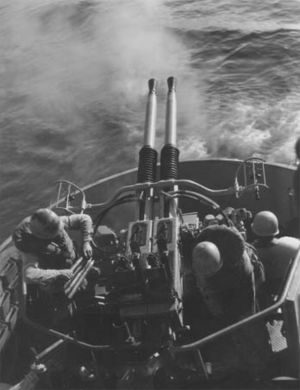 This was noticeable early in the Second World War, especially against tactical aircraft flying low and giving little warning, or diving on one's position. The lack of radar guidance for the guns, and proximity fuzes for the shells, made it even more essential to put up large numbers of shells to increase the probability of a hit.

In 1944 and 1945, the problem became even more acute, with the advent of the Japanese kamikaze. Previously, if one could knock down a bomber a distance away from a ship, it was no threat; its course took it into the water, or, if slightly damaged, back to base. When a kamikaze was first spotted, it was apt to be on a course that would deliberately crash into the target, so the energy of the antiaircraft fire had to destroy it in the air, or at least blast it off course so it would fall into the sea. The previous Oerlikon 20mm autocannon shells did not have the energy to do this, and Bofors 40mm autocannon were rapidly added.

The speed race between air defense weapons and incoming weapons continues, and, while the U.K. 30mm Goalkeeper and U.S. 20mm Phalanx Close-In Weapons System (CIWS) [pictured] are competent to deal with subsonic anti-shipping missile such as the French Exocet, they are not fast enough to deal with supersonic sea-skimming missiles such as the Russian Moskit (NATO SS-N-22 SUNBURN). Close-in defense systems are depending on faster missiles, such as the RIM-116 Rolling Airframe Missile (RAM). The Russian Kashtan (NATO CSDS-N-1), combines SA-N-11 GRISON missiles with Kortik autocannons. 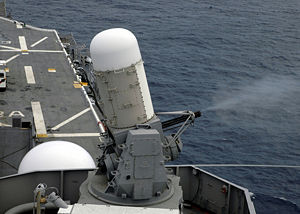 Ships, however, still carry autocannon such as the 25mm Bushmaster as a defense against attacks by small, fast boats. Especially when intending a suicide attack, these could be considered the lowest-altitude of sea-skimming missiles, and intercepting them is more of an antimissile than general antiship gunnery problem.

After the Second World War, the trend to autocannon of larger caliber continued, for several reasons. First, it might take a 5" shell to knock down a high-speed missile or jet aircraft. Second, by introducing automatic loading and firing, especially when ships' guns were radar-controlled and could be operated from a control room, crew size requirements went down.

There have been various trends to increase rates of fire for shore bombardment applications. Autocannon up to 8"/203mm were tried, but had too much recoil for small ships, which also could not carry enough ammunition. There were also experiments with radical designs, such as the Vertical Gun System, which required all shells to be precision-guided munitions.

Today's trend is to standardize on a 155mm naval autocannon, such as the 155 mm/62 (6.1") Advanced Gun System (AGS). [1] Initial enthusiasm for this weapon, which was to have been introduced in the new Zumwalt-class destroyers, has dimmed, when construction of that class was reduced to six or less ships, with two gun mounts per ship.

Since the 155mm is the standard land howitzer, it was hoped that there might be some commonality, but this has not materialized. The guided Long Range Land Attack Projectile (LRLAP) has been tested, but there is no ongoing development of a much cheaper ballistic "dumb" round. Naval guns are usually quite accurate, so there is less demand for precision guidance than with aircraft weapons. Precision guidance is needed for exceptionally long-range ammunition, especially rocket-assisted.

By the mid-1950s, 20mm autocannon had become standard for western fighter aircraft. The Soviets made considerable use of 23mm, and experimented with 37mm, but both sides generally found that the 20mm range was most useful for ground attack and air combat. There had been an assumption that air-to-air missiles would replace guns, and aircraft such as the F-4 Phantom II were originally developed without an internal autocannon. Vietnam War experience, however, quickly showed the need for a gun in some short-range air-to-air engagements. 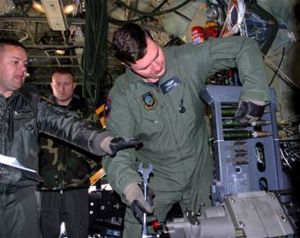 30mm Bushmaster intended to replace all autocannon on an AC-130

With the increasing speed of aircraft, autocannon became much faster-firing, with new mechanical techniques such as rotating barrels or chain gun feeds. Some of these autocannon could fire as fast as 6000 rounds per minute.

Availability of such high-speed machine guns and cannon led to Vietnam-era adaptation where several such weapons were side-mounted in a transport aircraft, and used for ground support in an area where there was no air defense threat. The technique has proved extremely useful and continues in today's AC-130H/U Spectre/Spooky II. 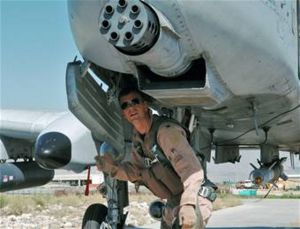 Originally intended for fighting Warsaw Pact tanks attacking Western Europe, the A-10 Thunderbolt II fighter-bomber is built around the GAU-8 30mm gun. While there have been larger aircraft cannon, this is the most powerfu; cannon, in terms of projectile kinetic energy and rate of fire, built into an aircraft. The A-10 was also intended to be extremely survivable, if not attractive; in practice, it is never called the Thunderbolt II, but the Warthog.

All new-construction fighters, no matter how advanced, carry an autocannon, usually 20 or 25mm, with a very high rate of fire, and only enough ammunition for a few bursts. In the future, a laser might replace the gun as a direct fire air combat weapon, but that is very different than replacing a gun with a missile. A missile has a minimum engagement distance and often restrictions on the engagement geometry.

While attack helicopters such as the AH-64 Apache carry 30mm autocannon with an antitank capability, they rely on missiles against tanks, and the M230 autocannon against people and light vehicles.

After the Second World War, there was a brief trend toward automatic AAA, such as the Soviet S-60 57mm and U.S. 75mm Skysweeper, but, by the early sixties, these were being replaced by surface-to-air missiles. The advent of man-portable air defense system missiles, which could be carried by one soldier, further reduced the role of automatic AAA. Still, there were adaptations of aircraft cannon, and some combined gun-missile systems.

Some exotic guns were proposed for terminal-phase ballistic missile defense, especially of point targets such as missile silos.

Multiple Round Simultaneous Impact realistically requires a full-automatic mechanism, on large-caliber artillery. It allows a single barrel to fire several rounds, on different trajectories, such that they land simultaneously. Traditionally called "time on target", such an impact pattern minimizes warning and maximizes shock to the enemy, concentration historically took multiple guns firing at once.
Retrieved from "http://en.citizendium.org/wiki?title=Autocannon&oldid=100522710"
Categories: