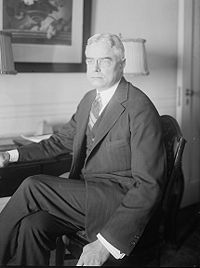 Albert Cabell Ritchie (1876-1936) was an American politician who served as the Governor of Maryland from 1920 to 1935. He was a member of the Democratic Party. Ritchie won the gubernatorial election of 1919 in a close margin of 327 votes against Republican Henry W. Nice.[1] Ritchie is sometimes cited as a figure in the political faction known as the "Old Right" branch of American conservatism[2] and was a staunch advocate for states' rights. He was one of the leading opponent of the Prohibition on federalist grounds.[3]