Overview of the ARL's Responsibilities

ARL develops models relating to climate and air quality, including the transport, dispersion, transformation and removal of pollutants from the ambient atmosphere. The emphasis of the ARL's work is on technology development and transfer. The specific goal of ARL research is to improve prediction of trends, dispersion of air pollutant plumes, air quality, atmospheric deposition, and related subjects.[5]

ARL provides scientific and technical advice to other groups within NOAA and other government agencies on atmospheric science, environmental problems, emergency assistance, and climate change. 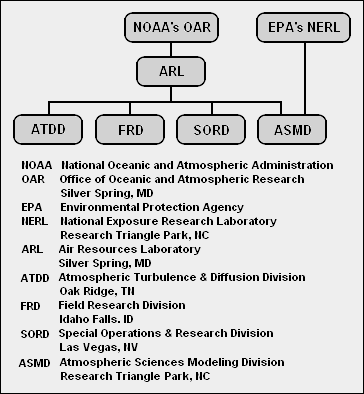 As shown in the adjacent diagram, the ARL has four divisions which are respectively located in Tennessee, Idaho, Nevada, and North Carolina.

The Field Research Division (FRD) is located in Idaho Falls, Idaho. FRD conducts experiments to better understand atmospheric transport and dispersion, improves both the theory and models of air-surface exchange processes, and develops new technologies and instrumentation to carry out its mission. In a cooperative agreement with the U.S. Department of Energy, the Division supports the Idaho National Laboratory with meteorological forecasts and emergency response capabilities.

The Special Operations & Research Division (SORD) is located in Las Vegas, Nevada. SORD conducts basic and applied research in atmospheric dispersion, particle re-suspension, particle deposition, and the effects of airborne particles on atmospheric opacity. This Division supports issues of mutual interest to NOAA and the Department of Energy that relate to the Nevada National Security Site, its atmospheric environment, and its emergency preparedness and emergency response activities.[6]

The Atmospheric Sciences Modeling Division] (ASMD) develops and evaluates predictive atmospheric models on all spatial and temporal scales for forecasting air quality and for assessing changes in air quality and air pollutant exposures. It was established in 1955 to collaborate with the U.S. Environmental Protection Agency (EPA) and its predecessor agencies in developing advanced air quality models. The ASMD currently works in a partnership with the EPA and is located in Research Triangle Park, North Carolina.[7]

The ASMD is responsible for providing a sound scientific and technical basis for regulatory policies to improve ambient air quality. The air quality and pollution dispersion models developed by the ASMD are being used by the EPA, NOAA, and the general air pollution community in understanding and forecasting not only the magnitude of the air pollution problem, but also in developing emission control policies and regulations.

The predecessor of the ARL was the Special Projects Section (SPS) of the United States Weather Bureau (now NOAA's National Weather Service). The SPS was created in 1948 as the nuclear era emerged and it became apparent that the transportation, dispersion and fallout of radioactive substances from the use of nuclear weapons posed dangers that mankind had never faced before.[8]

The SPS was created to engage in meteorological research to assist the emerging atomic energy programs of the United States, much of which involved weapons testing.

The first director of the SPS was Dr. Lester Machta who was joined by four other meteorologists. Initially, funding came from the Department of Defense and later from the Atomic Energy Commission, the predecessor of the Department of Energy. A great deal of funding also came from outside financial support.[8]

One of the most important contributions of the SPS was publication of the book Meteorology and Atomic Energy in 1968, edited by David H. Slade. That book summarized the state of the science about the Planetary Boundary Layer (PBL) processes and the applied meteorology of air pollution plume rise and dispersion, and turbulence and atmospheric stability. With contributions from SPS scientists and other experts, that book was the primary source of information about air pollution dispersion for many decades.[8] 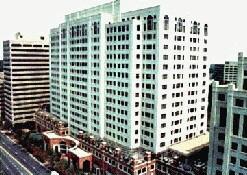 In the early years, the SPS was headquartered in Washington, DC. When the SPS became part of NOAA and was named the Air Resources Laboratory, the headquarters moved a number of times and ended up in its current location in Silver Spring, Maryland.[8]

For those who are unfamiliar with air pollution dispersion modeling and would like to learn more about the subject, it is suggested that either one of the following books be read: