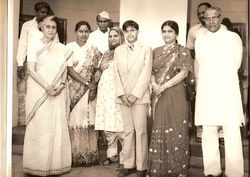 Ahmad Bakhsh Sindhi was born to Haji Mola Bakhsh Sindhi and his wife, Saira Hazan in Bikaner, Rajasthan. Sindhi was primarily raised and educated by his mother because his father died when he was 8 years old due to choking on a bone.

In 1944, Sindhi was a gold medallist/top achiever during his Master of Arts and Bachelor of Laws studies at prestigious Aligarh Muslim University in the city of Aligarh in Uttar Pradesh, India.

Subsequently, from 1944-1947, he became a lecturer in philosophy at Dungar College in Bikaner.

On June 6, 1945, Sindhi married Ameena Begum of Bikaner. They had a happy marriage which produced five daughters and one son.

Sindhi's first political achievement was being appointed to the position of Cabinet Minister for the independent state of Bikaner by its Maharaja, Sir Sadul Singh, in 1948.

From 1949 to 1980, Sindhi practiced law in the Rajasthan High Court in Jodhpur's Zeb Manzil. He was known for feeding the poor there as well as his overall social work for the lower class in the area. One notable instance was his campaign to help people get housing instead of living on the street by the Sardarpura Cemetery.

During a 1971 debate regarding the Indo-Soviet Treaty of Peace, Friendship and Cooperation, Sindhi is cited to have tried to add the amendment to the treaty:

… If any country invades us [India], we shall depend solely on our own defensive resources and will try to obtain as much aid from other friendly countries as possible.[1] — 1971 Indo-Soviet Treaty of Peace, Friendship and Cooperation

In 1980, he was elected to the Rajasthan Legislative Assembly (or Vidhan Sabha), representing the city of Jodhpur, India. Soon after, Sindhi was named Deputy Speaker of the Rajasthan Assembly for one year.

It was in 1983 when he reached the pinnacle of his political career, when he became Chief Law and Justice Minister in Shiv Charan Mathur's ministry by Indira Gandhi. He retained this position until March 1985.

Sindhi spent the next few years of his life alternating between life in India and in the United States to visit his children and grandchildren. By 1994, he eventually settled down in the US, living with his wife and their son.

After a strenuous time living with his son, Sindhi had a cardiac arrest in 2000, and was taken to William Beaumont Hospital in Detroit. He passed away on April 28, 2000 from complications of his cardiac arrest. At his bedside was his daughter, Naseem Salim.